The Numbers | A2 Wind Tunnel Visit #1

We went into the testing with the attitude of “well, now we figure out if we are full of shit or actually as good as we’ve been telling everybody.”  The results were relief, justification, validation and a point of pride.

The Yaw Conversation:  What Really Matters?

This is an important question, as we need to know what test numbers are pertinent.  Finding data at points that are not valuable in real world conditions was not our goal.  We wanted data that would benefit every rider and every racer.

As a quick background, testing at different yaw angles is meant to simulate cross wind conditions.  One important thing to understand, from a simple mechanics standpoint, is the resultant drag vector direction.  Assume a rider moving forward at 25 mph with a 30 degree cross wind buffeting at 10 mph.  The actual drag vector direction would be much closer to a zero yaw condition than you may assume, because the rider is moving forward much more quickly than that cross wind is approaching at that 30 degree attack.  Pair that with the basic knowledge that drag increases with the square of speed, and you can see why the forward motion of the cyclist provides a much higher source of contribution to resultant drag vector angle (yaw).

Empirical evidence shows that over a wide range of testing, conditions, and locations, the resultant drag vector angle will be between -10 and +10 degrees between 95-99% of all time spent riding.  (See http://www.slowtwitch.com/Tech/Real_World_Yaw_Angles_5844.html, OR http://road.cc/content/feature/213876-why-riders-you-need-go-aero-and-wheel-weight-doesnt-matter-%E2%80%94-and-how-wind).  We can deduce that the most important numbers when looking at drag lie between 0 and 10 degrees.  Anything beyond 12.5 degrees will be rarer, especially if you are of base-level fitness.

We were prepared for this to be a blood bath against industry standard wheels, and all we wanted was to get close.  We tested WAKE 6560(V1 prototype) against Zipp 303, Zipp 404, HED Jet6+, and Zipp 60.  Testing at A2 Wind Tunnel, Mooresville, North Carolina, was performed back to back, on the same rig, with the same Continental Grand Prix 4000 SII 23mm tire, at 100psi.

We know that the majority of time is spent between 0-10 degrees yaw angle.  Here is our raw data, taken from A2, which shows that WAKE 6560 beats every competitor, with the time weighted average savings yielding over 8 grams of drag saved (front wheel only). 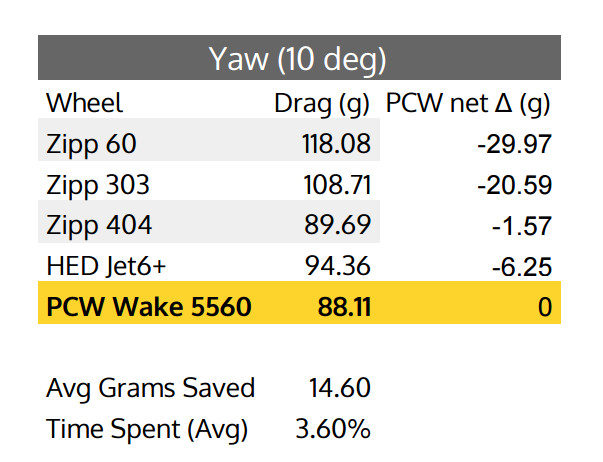 We created a wheel and wheel system from the ground up:  we went from concept sketches to 3D models to machined samples to true, working prototypes, and these prototypes are the fastest out there.  To us, this is the testament of years of hard work and big dreams.  To you, this is speed.  Better Speed.